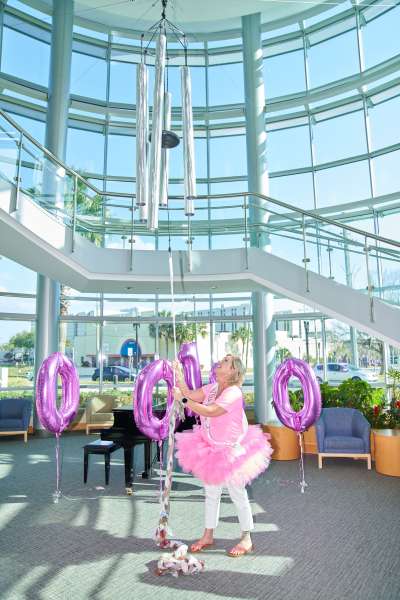 On February 23, a Jacksonville woman became the 10,000th person to complete proton therapy at the University of Florida Health Proton Therapy Institute (UFHPTI). Dacia Starratt, a 47-year-old native of Jacksonville’s Oceanway neighborhood (shown right), had 32 daily treatments over a 6- to 7-week period for breast cancer.

Proton therapy, also called proton beam therapy, delivers a precise radiation dose to destroy tumors and minimize damage to surrounding healthy tissue. The UF Health Proton Therapy Institute was the first to offer this advanced form of radiation treatment in the southeastern United States when it opened in 2006. It is ranked in the top five proton centers globally for the number of patients treated according to the international Particle Therapy Co-Operative Group.

The largest and most experienced radiation oncology practice in the region offering proton therapy, the Institute boasts 13 radiation oncologists, each of whom are University of Florida physicians specializing in the types of cancers they treat. They collaborate with a clinical team of medical physicists, dosimetrists, nurse case managers, and radiation therapists to design a treatment plan for each individual patient.

“Each person we have had the honor to care for during our 15 years has received customized treatments designed to give them the best chance for cure with the least amount of potential side effects during and after treatment,” said Nancy P. Mendenhall, M.D., medical director of the UF Health Proton Therapy Institute. “Our commitment to excellence and compassionate cancer care extends to Mrs. Starratt, who happens to be our 10,000th patient, and for each patient who follows.”

Proton therapy is an outpatient treatment given daily over a four- to eight-week period, depending on the type of cancer being treated. Each patient has a total of between 20 and 40 proton therapy sessions. With 10,000 patients, the Institute has delivered 330,000 proton therapy treatments.

“The milestone speaks to the success of the Institute, both the effectiveness of proton therapy in achieving excellent patient outcomes, and the sustainability of the technology to serve a large number of patients for a long period of time in a culture of compassionate care,” said Stuart Klein, executive director of the UF Health Proton Therapy Institute.

The Institute has a well-established reputation in the U.S. and abroad for expertise in treating cancer with proton therapy, including rare tumors and conditions that occur in adults and children. Thousands of patients from greater Jacksonville and throughout Florida, the 49 other states and more than 33 countries have been treated for over 20 types of cancer including tumors that occur in the brain and central nervous system, breast, eye, head and neck, gastrointestinal system organs such as the esophagus, pancreas and liver, lung, prostate, as well as sarcoma and lymphoma.

With over 300 research studies published in peer-reviewed medical journals, the Institute has demonstrated a commitment to follow patients long-term, analyze the data, report outcomes, and improve treatment. The clinical research studies conducted during the first 15 years have produced evidence of proton therapy’s advantages – reducing radiation dose to healthy tissue, reducing side effects, lowering the risk of developing secondary cancer and improving quality of life outcomes for thousands of patients.

In 2019, the Institute completed a 10,000 sq. ft. expansion and installation of a single-room proton system ProteusOne, bringing the leading edge technology pencil beam scanning, or PBS, to the region. The Institute has five proton therapy treatment rooms, including a fixed beam for eye cancer treatment. As a comprehensive radiation oncology center, the 110,000 sq. ft. building is equipped with the most advanced conventional radiation devices such as IMRT, SBRT and imaging devices such as MRI, CT and PET-CT scanners, in addition to its two proton therapy systems.

For more information about UFHPTI, visit the institute’s website.