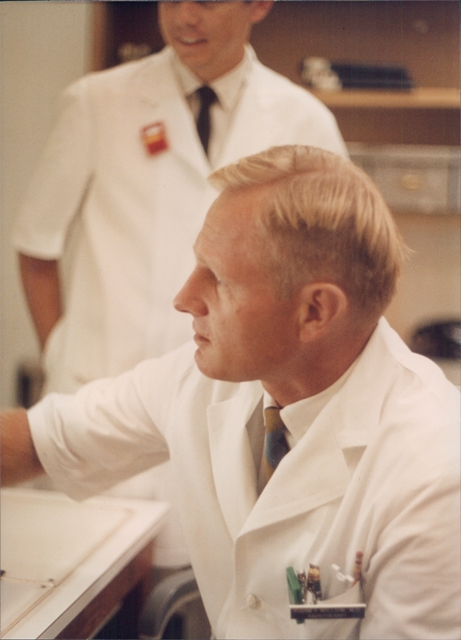 Born in Idaville, Indiana, on April 3, 1929, Dr. Million received his M.D. from the Indiana University Bloomington (IU) in 1954 and completed an internship at Harbour General Hospital in LA County, California. After serving as a U.S. Air Force flight surgeon from 1955 until 1958 in Morocco, he began a residency in radiology at IU in 1958.

“I can still remember the first day of radiotherapy – I loved it,” he recalled in a 1995 UF Radiation Oncology department interview. “In the service you take care of people with trivial conditions; now, here were patients who were really sick, and they appreciated what you did for them.”

Dr. Million continued his career in 1960 with the department of Therapeutic Radiology at MD Anderson Cancer Hospital (MDAH) in Houston, Texas, under the direction of Dr. Gilbert Fletcher, one of the early leaders in the field.

“You have to know about the MDAH training program to understand the UF program,” he once explained. “It was well organized. The staff physicians were assigned to a machine, in contrast to UF, where we used any machine. But each staff had one or two subspecialties they monitored…the idea of subspecialization within the radiotherapy department was important.”

After his training at MDAH and a brief return to Indiana, Dr. Million eventually interviewed for a position at UF.

“I kept watching the ads, and I saw the UF job advertised in JAMA. They wanted an assistant. I got a Florida map to find out where Gainesville was… where in the world is Gainesville, Florida? I thought it looked interesting. So we came down for an interview.”

Appointed Chair of what was then the Division of Radiation Oncology in the Department of Radiology in 1964, Dr. Million led both the division’s dramatic growth and UF’s leadership in the field of radiation oncology for the next 28 years, including the launch of the first annual UF Radiation Oncology Outcomes Tracking Seminar, the first graduating class of the Radiation Oncology Residency Program in 1971, and the opening of the department’s Research/Editorial office in 1973.

“Dr. Million remained an enthusiastic educator throughout his long career, establishing a General Oncology course for second-year medical students and training innumerable residents, both within and outside of the field of radiation oncology,” recalls department alumnus and radiation oncologist James Parsons, MD.  “He was an early adopter of the concept of Multidisciplinary Cancer Care and established patient-focused tumor boards as early as the 1960s. He was a strong advocate for radiation oncology, not only in Florida, but throughout the United States and the world. “

An author of nearly 350 articles, book chapters, and books, Dr. Million crafted the groundbreaking “Cancer in the head and neck” in Principles and Practice of Oncology in 1982 with Dr. Nicholas Cassisi and Dr. R. E. Wittes, as well as the influential first edition of Management of Head and Neck Cancer: A Multidisciplinary Approach in 1984, also with Dr. Cassisi.

“Dr. Million was a remarkably talented clinician who stressed the importance of following patients indefinitely and analyzing and publishing their outcomes in the medical literature to determine how to improve patient care,” said William M Mendenhall, MD, FACR, UF Resident Alumni Professorship, Department of Radiation Oncology. “He would say that ‘the clinic is your radiobiology lab’ where you could appreciate both your successes and failures and change things for the better.”

In 1995, Dr. Million’s achievements were recognized by the American Society for Therapeutic Radiology and Oncology (ASTRO) with the organization’s Gold Medal Award, ASTRO’s highest honor bestowed on revered members who have made outstanding contributions to the field of radiation oncology.

“He insisted on maintaining meticulous medical records, constantly reviewed outcome data on University of Florida radiation oncology patients, and modified his treatment strategies according to his observations,” said Dr. Parsons. “For example, in 1977, his research presentation at the University of Florida Radiation Oncology Clinical Research Conference analyzed the time-dose-fractionation patterns that he had used in his early years at the University of Florida for early vocal cord cancer. At that symposium, he settled on 6300 cGy in 28 fractions over 5 1/2 weeks as the optimal strategy. Forty-four years later, his strategy has withstood the test of time – not only at the University of Florida but also worldwide – as a standard of care. He was a tireless worker who expected the same hard work and discipline from all of those that he trained. He was a meticulous physical examiner and taught his techniques to students and residents in many disciplines. He inspired numerous trainees, many of whom still apply his principles today.”

Dr. Million’s abundant contributions also included service as a member of the Board of Trustees of the American Board of Radiology; founding membership in the Gilbert H. Fletcher Society, which supports research on the forefront of cancer care; his role as a member of the editorial board for the International Journal of Radiation Oncology • Biology • Physics (IJROBP), known in the field as the Red Journal; and American Cancer Society and National Cancer Institute appointments.

In addition to the creation of the Rodney R. Million, M.D. Chairman’s Professorship in Radiation Therapy at UF, in 2018 the Million family established the Dr. Rodney R. Million Fund for Innovation and Clinical Care through International Cancer Expert Core (ICEC), which supports medical students and doctors in the fight against cancer in low-income countries.

Dr. Million is survived by Marge, his wife of 66 years; sons Jeff, Brad, and Steve; daughter Lynn; six grandchildren and one great grandchild. The family will have a private service.

In lieu of flowers, donations in his honor can be made to the ICEC Dr. Rodney R. Million Fund for Innovation in Clinical Care. To read more about Dr. Million’s life, visit https://gainesvillesun-fl-app.newsmemory.com/?publink=4d4d8c2e1_1345c3f or the UF Radiation Oncology website’s History pages.