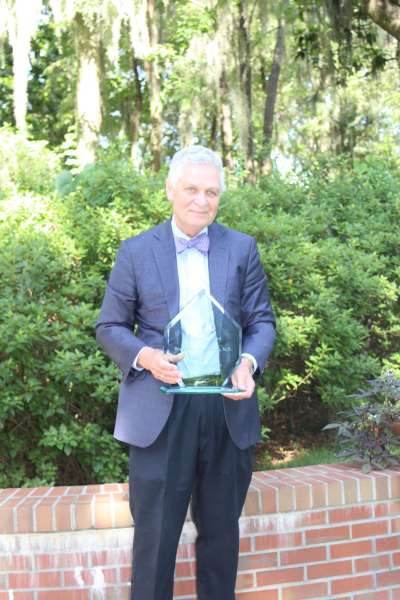 Beloved Radiation Oncology Professor William Mendenhall, MD, has been selected to receive the 2020 UF College of Medicine Faculty Council Lifetime Achievement Award and was honored on May 15 during a virtual award ceremony with Dean Tyndall.

The award recognizes the College’s most outstanding, active peers for providing extraordinary service and expanding UF’s national reputation in their respective professions. It is aimed at faculty who have been at UF for at least ten years and many past recipients have devoted over 20 years to the College.

“Internationally, without a doubt, Bill is regarded as the foremost expert in the treatment of head and neck cancer with radiotherapy and among the top world experts in proton therapy,” said Paul Okunieff, MD, Professor and Chair, Department of Radiation Oncology. “Like many of his patients, staff, colleagues, and trainees, I was drawn to UF by his stature in the field. His famous textbook of head and neck radiation oncology remains the standard teaching tool.”

Dr. Mendenhall began serving cancer patients in the Gainesville and Jacksonville areas in 1978, first as a resident, then as a faculty member as well as medical director of the Gainesville clinic. Since 2003, he has held the University of Florida Resident Alumni Professorship in Radiation Oncology, funds that he generously dedicates to building UF Radiation Oncology clinical research operations.

The success of the UF Radiation Oncology department, which has produced some of the largest single-institution datasets in radiotherapy outcomes research, particularly in the area of head-and-neck cancer, is greatly attributable to the culture of learning and clinical improvement that Dr. Mendenhall has nurtured. In addition, the system for clinical trial excellence that he created at UF has allowed the department to publish some of the largest single-institution studies in several diseases, hold an annual research symposium featuring prospectively collected data on thousands of patients, and assist the cancer center reach demanding patient accruals onto clinical trials.

As the Operations Editor of the International Journal of Particle Therapy, Dr. Mendenhall helped to found the first peer-reviewed international academic journal for particle therapy, and he has served as an associate editor for numerous other academic journals. He has participated on countless education, cooperative group, publications, and academic search committees, and has served as a grant reviewer and an abstract reviewer for several international societies. He was inducted as a fellow of the American Society of Radiation Oncology in 2016 for his service to the society as well as his patient care and educational achievements.

“The true impact of Dr. Bill’s career can be seen in the countless patients who have benefited from the knowledge he has contributed,” said Daniel Chang, MD, Sue and Bob McCollum Professor, Vice Chair of Clinical Operations, Department of Radiation Oncology, Stanford University. “He has devoted decades of his life to improving the quality of radiation therapy for head and neck cancer as well as many other disease sites. He inspires trainees – past, present, and future – with his perfect blend of success and compassion.”