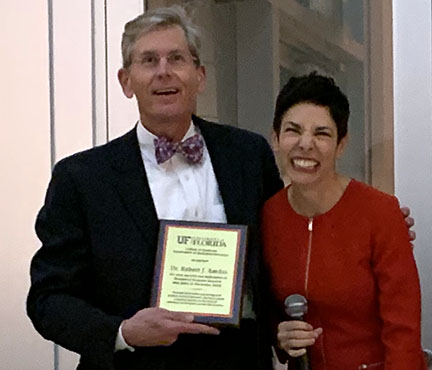 Dr. Amdur will continue to serve as a Radiation Oncology professor and physician, and will also act as a mentor to students of all levels.

Dr. Amdur received a BA in Economics from Swarthmore College, Swarthmore, PA, in 1981 and an MD from the University of Florida in 1985. A master educator who has served on the Institutional Committee for Graduate Medical Education since 2001, he has impacted residents on a national level and earned University of Florida College of Medicine Exemplary Teacher awards in 2005, 2012, 2016, 2018, and 2019. In addition, he received the Association of Residents in Radiation Oncology Teacher of the Year Award in 2008 and 2019.

“It is an honor to have the opportunity to reflect on the career of Bob Amdur as we continue to celebrate our residency program’s 50th anniversary, given his superb leadership as its Director for nearly 20 years and his unwavering dedication to its mission and success,” said Dr. Okunieff. “These years have been distinguished by Bob’s extraordinary, integrated approach to research and education and great warmth and integrity as a physician and colleague, and we look forward to the exceptional leadership that Dr. Yeung will bring to the program in the future.”

Dr. Yeung received a BS in Physics from Florida State University, Tallahassee, FL, in 1997, and an MD from the University of Florida in 2004. A member of the American Society for Radiation Oncology, she received the department’s Talken Award for Most Outstanding Resident Research in 2007, the Society of Teaching Scholars Outstanding Resident Teacher Award in 2008, the UF College of Medicine Exemplary Teacher Award in 2011, and the Best of the American Society for Radiation Oncology Award in 2014, among other honors. In 2016, Dr. Yeung was inducted into the Gold Humanism Honor Society (GHHS) as one of only three faculty members from the University of Florida selected by the society’s chapter that year.