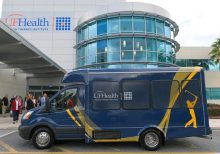 The UF Health Proton Therapy Institute (UFHPTI) has treated more than 650 adolescents and young adults and 1,600 children. It has the largest pediatric proton therapy program in the world, serving, on average, 25 children per day.

Now, the institute has a new 14-passenger shuttle bus to transport patients and their caregivers – primarily children and their families staying at the Ronald McDonald House – to and from their daily treatments, thanks to THE PLAYERS Championship.

Read more about the organization’s generous gift to UFHPTI here.

Our Mission is to prevent, detect, treat and ultimately cure cancer while addressing the unique challenges of the cancer burden faced by the people we serve.